It’s no secret that Louis CK often speaks insightful truth, albeit sometimes in the midst of off-color comedy. His comments on the influence of technology on the human condition have gone viral on two separate occasions. He’s outspoken about racism and white privilege. He’s honest, though perhaps exaggerating for comedic effect, about his flaws and foibles.
A few lines in particular of his stand-up have stuck with me for a few years. I have reproduced them below.

I just want to ask you, have you ever done something or lived a moment that you afterwards said,
“yeah, I don’t think I’m going to tell anyone about that. Yeah that’s going to my grave with me, that one is.”
Either because it’s stupid, embarrassing, or horrible you just think…
“yeah that’s staying with me. I’m not telling any people about that.”
I would say that probably 40% of my life is made up of moments like that. This bit stuck with me such that I’ve wanted to blog about it for some time now, but I couldn’t remember where I had seen it. This bit stuck with me and I’ve searched for it several times on YouTube and Google. Recently I Googled as many of the words I could remember and found it. It was shown merely a transitional buffer between two scenes on his FX show. It stuck with me because I have a few of those moments as well.

Whether because they’re stupid or embarrassing or horrible, I have moments that I won’t discuss with anyone. I have moments in my past that I am ashamed of, that I don’t want known. I’ve been foolish or uncool to a degree that I can hardly believe myself. Sometimes it’s not the thing that was done or said that will never be shared, but the thought process or motivations I had for the action. I’ve been bad for no reason, and I’ve been good for bad reasons.
Louie’s words stuck with me because it’s validating to hear someone else discuss that same phenomenon. In a way, it relieves psychological pressure to know that I’m not the only one with an internal experience like that. 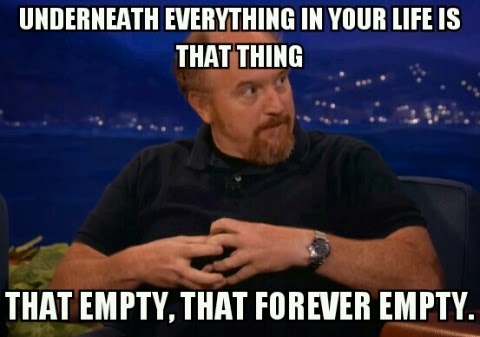 To be open about the deepest, worst, parts of oneself, to share something stupid, or embarrassing, or horrible and still be accepted, is perhaps the greatest experience a human can undergo.
To start a sentence with, “I’ve never shared this with anybody…” is frightening.
But after such a sentence, to know that the relationship isn’t over, and maybe hasn’t even changed, to still feel accepted and loved, that is glorious.

The stupid, embarrassing, horrible moments still occur but I now know I can share them with someone.
The more those moments are shared, the more the relationship deepens.
The more open you are, the more known you become.

Gaining the courage to share these moments with a counselor, or a friend, or my wife is a process. It takes building trust. It takes growth and maturity. But it’s worth it; it’s glorious.
I want to close with another glorious truth.

That is the offer of perfect relationship.


That is the good news.

With the fear of sharing so high and damage to relationship/other person seeming so high, it often feels all risk no reward! It couldn't be more opposite in reality.

My "go-to" is usually the "I'll share when both sides are ready..." approach. Which promptly turns into forgetting, which doesn't feel so bad. Not the situation God desires for us in the least!

Thanks for the reminder of the power we have over fear and the goodness of being known.