On Coffins and Crosses

For Easter this year we went to the house of some new friends here in Oregon. It was a nice little gathering. They had activities set up for the kids and gift bags to take home. 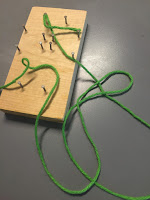 In each gift bag was a small piece of wood with nails and yarn affixed to it. The idea was, by winding the yarn around the nails in the appropriate way, the yarn would form the shape of a cross. It was a clever Easter themed craft.

Since Easter, the two wood pieces have been floating around the house in various toy boxes and piles, used every once in a while. Recently Isaiah was playing with his, wrapping the yarn around the nails in a carefree manner, not intending on forming the cross shape it was designed to reveal.

Which prompted Isaiah to ask,
“What’s a coffin?” 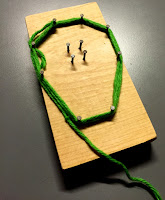 At this point my wife and I looked at each other across the room and exchanged a ‘do we really want to talk about this with our seven year old?’ look. There was a little bit of a ‘you started this’ accusation coming from my side of the equation.
I tried to smooth things over and avoid the awkward conversation by answering his question in the most indirect way possible,
“A coffin is a box, son.”
But that backfired as Isaiah immediately started chanting
“a coffin box, a coffin box, a coffin box!”
So I realized I needed to give him some more detail so it didn’t get awkward in the future. I could just imagine him telling someone he needed to put all his toys in a coffin, or ask for a coffin to take home his leftovers at a restaurant. I clarified,
“…well, it’s a box your body goes in when you die.”

Isaiah was satisfied, though still a little puzzled.  I think he said, “oh” but the conversation didn’t go much further.

Later I reflected on the interaction. Why did I feel it was awkward for my seven year old to talk about coffins but not about crosses? A moment of logical consideration would lead to the conclusion that the two are very similar objects. If anything, the cross is a more difficult point of conversation.

The Weight of Symbols

The cross is an ancient torture device used to cause pain and death. Not only was it an implement of painful death, it was utilized to satiate, or frighten the mob, by making a public spectacle of death.
If that’s not weird or awkward enough to discuss, for one particular religion the cross symbolizes all the evil in the world poured out upon all the good in the world. It symbolizes a person taking all the evil thoughts and deeds that my seven year old has done and will ever do and giving him the opportunity to be absolved of that guilt and relieved of that shame. This, of course, means that we’d have to discuss God’s standard of perfection and his inability to reach it (we have discussed this previously, but not in depth). We’d have to discuss the wrath and judgment of a loving God, a topic that is scandalous to humanity and, most likely, incomprehensible to a child. I’d probably have to define ‘Substitutionary Atonement’ and a few other big words in the process. We might get into talking about the resurrection and ascension and imminent return.
This conversation wouldn’t end without touching on the trinity, and we all know that’s not an easy topic.

And a coffin is just a box your body goes after your die.
(Granted, this implies the truth that we’ll die someday).

I’m not totally sure why a cross is easier to talk about.
But, I think it might be because, as a symbol, the cross has been watered down to the point that it’s primarily a fashion statement.

It doesn’t bring to mind torture and death and atonement, it looks pretty in the sunset. Or maybe it gives us a vague sense of something “spiritual”.  There’s not much time spent discussing the meaning of the symbol. 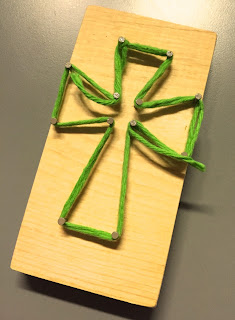 A cursory look at my Facebook timeline shows American Christians seem to be more interested in fighting a culture war than in the scandal of the Cross.  Maybe some doctrines are worth fighting for and maybe some social issues are important and maybe America’s definition of ‘morality’ has shifted… but the Gospel of theKingdom is about the God-Man who was tortured and died on a cross to make the Kingdom available to all.

The cross isn’t a safe symbol; it’s subversive. It takes you from wherever you are, psychologically, morally, politically, socially, or whatever, and messes you up. It won’t settle for your expectations and preconceptions. It declares that there’s unearned holiness available. Not just available, needed.

I hope I don’t live my life as though the cross is merely artistic or therapeutic. I hope I’m not afraid to welcome sinners and admit that I’m among them. I hope I don’t forget that the cross is more shocking than a coffin.
I hope I’ve learned not to cloak symbols in euphemism.
Maybe seven is a little young for the weight of either of these symbols to be fully grasped. But it’s not too young to start the conversation.

In closing, I’ll share another symbol formed by the yarn around the nails in the wood, a symbol of something after the coffin, and made possible by the cross. 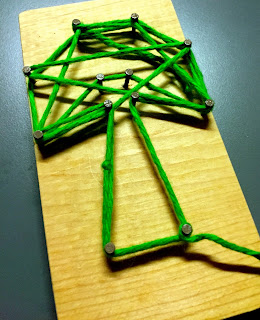 Then the angel showed me the river of the water of life, bright as crystal, flowing from the throne of God and of the Lamb through the middle of the street of the city; also, on either side of the river, the tree of life, with its twelve kinds of fruit, yielding its fruit each month. The leaves of the tree were for the healing of the nations.