This was originally posted September 30, 2011
This post was written about the process of contributing to the advent devotional Our Savior Come.

Writing about writing seems weird to me. I’ve also done it before when my personal deadline for posting a blog was long passed.  It feels a little like cheating, filling space just to check it off the list. (For example, filling a page with “I’m writing now.  I’m writing now".) 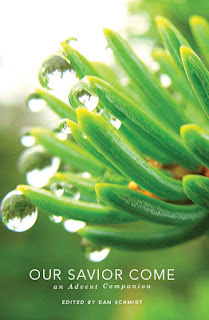 However, I was asked to write about the process of contributing to Our Savior Come; so here I go.  I tried to consider what was the most profound aspect of writing the two pieces I submitted and it was a little difficult.  For me, there wasn’t really anything remarkable about writing for the Christmas season in August; I wrote them in much the same way that I normally write blogs.  There wasn’t anything significant about contributing to my first book; that is a milestone for me, but the reality hasn’t set in yet.

I have never met Dan in person but I worked on my two pieces and sent them away to him like they were my little children going to boarding school.
He said he liked them.
Then he tried to change them.

At first, he only changed simple things, like grammar.  Then he asked me to add emphasis or clarity to certain points.  I was very encouraged by these changes.  I realized where my writing would improve with an editor.  I realized that someone who didn’t know me might have found this or that sentence unclear.  I realized that if I took  a little more time and elaborated a little I would communicate much better.
Next, structural changes were suggested.  I was a little less comfortable with these.  I had wanted to lay it out how it flowed from my thoughts to the page.  I wanted those awkward pauses and shifts.  I wanted to explain the back story behind each point, even if it distracted from the main points.  I wanted to state my second point a little early, who cares if it distracted from my first point?!?

Last were the editorial comments and questions regarding the ideas I was communicating.  Questions about what I meant on a theological level were responded to through a long email correspondence.
Admittedly I was a little frustrated.  I was writing a reflection, not a treatise; why did theological critiques arise?  If I could lead the reader into contemplating Christ in the season of Advent, why did it matter exactly how I did it?  I didn’t intend my writings to fit into one particular view on some specific doctrine; why did it matter if it fit into another one?   If the reader disagreed with my point of view, couldn’t he or she still take away some of the intended meaning?

Writing about writing about Christmas helped me draw the following conclusion:
Christ edits us; and it isn’t always fun.

Like Dan, Christ starts out with some of the more obvious issues in our hearts.  He helps us take away some things we don’t like and add some things we know are better for us.  But then he starts rearranging a little and we wonder when he’s going to stop.  We go along with it because, well, he’s the editor, but we are a little wary.

Then he questions the very core of who we are.  He makes some comments about things we’ve believed for a long time.  He presents a different way of doing things that we might not have ever thought of.  He recommends a best way of thinking, a way that might very well exclude an ok way of thinking.

You can be the judge of the editing process between Dan and I.  I’d like to think that it turned out ok.
The more important process is Christ’s editing of me.