Repost: The Dragon We Got

About a year ago I wrote a reflection about trusting God in the process of adopting our son, Isaiah, from India.  I borrowed Donald Miller’s comparison of a father to a Dragon which he made in his book To Own a Dragon and applied it to a son.  For me a son seemed just as unattainable as a father was to Miller, as unattainable as a dragon.  I borrowed from Ursula Le Guin’s mythology of dragons found in her Earthsea Cycle to illustrate how special and magnificent my son was.  I concluded by affirming the faithfulness of God in keeping his promise to deliver Isaiah to my wife and me.  I referred to God as The Giver of Dragons.
Soon after that writing administrative pieces fell into place and we flew to India to meet our Dragon.
A little under a year ago we brought home the dragon we got.

Unlike some other fantasy stories, in Earthsea the dragons are higher than other creatures.  Dragons deign to involve themselves in the lives of men, but they are older and wiser than mankind itself; they are wholly other. While the men and mages scurry about their day to day tasks, the dragons simply exist.  Their actions are beyond; unclassifiable as either right or wrong.

Language is important in all of Le Guin’s writings; in Earthsea dragons speak in the Language of the Making, the language the creator used to raise the islands of the Archipelago.  Mages study to speak their spells and work their Art through the Language of the Making, though only few Mages know the language well.
The dragon we got speaks his own language of power as well.  He puts on a stern face and points his finger and releases a string of words that stop us in our tracks.  Sometimes he’ll stop us in the midst of some activity and simply say “No!”.  He doesn’t hope that his commands are followed, he assumes it.  When he steps up to a door he says, “Door, Open!” with a wave of his hand, and when it’s not an automatic door I’m surprised that it doesn’t just open anyway.  He uses words that only the Creator can understand.  He uses words we’re not sure we want to understand.
He is the dragon we got.

The Archmage of Earthsea, Sparrowhawk, is one of the few mages that the dragons will speak to.  Despite all his great deeds and wisdom, Sparrowhawk’s contentment comes from a time he saw dragons dancing on the evening wind.  We have done many joyous and wonderful things, both together and separate in our lives.  Some evenings, our greatest contentment comes from lying together with our dragon between us, kissing him together on both cheeks and saying, “Family!”.  No matter what I do henceforth, I have spoken with this dragon and I am content.
We are content with the dragon we got.

In Earthsea a thing’s true name is linked to it's essence.  A person’s true name is in the Language of the Making but the name they are known by, their 'use name', is in the common tongue.  Dragons call people by their true name even upon their first meeting.  They use true names because they recognize the truth in the depths of people.  Dragons call the Archmage “friend”.  Upon meeting a young boy, a humble prince of one of the many islands in Earthsea the Eldest dragon calls him “Agni”, the word that means “King”;  the prince will later step into his destiny as King of all the islands that make up the archipelago.

The dragon we got knows something of true names and essences as well.  When I come home from work he looks up and yells, “Papa!”.  When he wakes up at night scared and confused he yells, “Mama!”.  When Candice comes home from the store he climbs up the couch so he can see out the window and yells, “Mama!”.  When he gets off the bus from preschool he points at me and says to the bus driver, 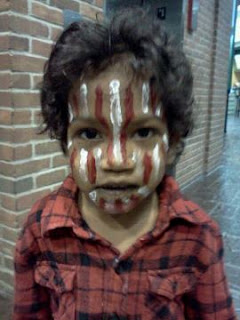 “This is my Papa!”
We are ‘Mama’ and ‘Papa’ because we have been so named by the dragon we got.


But the Giver of Dragons knows what he is about, he knows the desires of our hearts and he knows that our family wouldn’t be complete without the dragon we got.